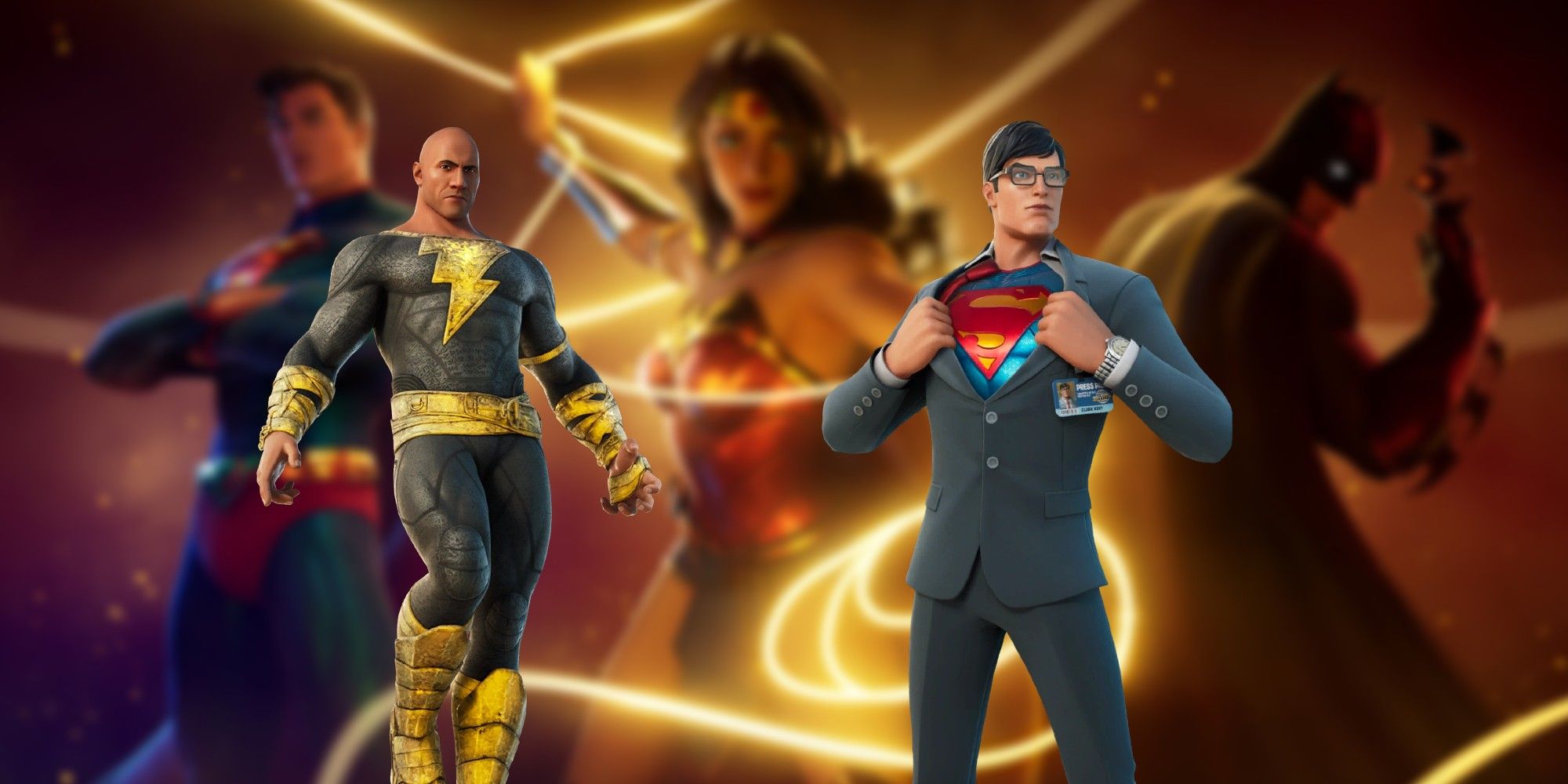 Fortnite has featured many crossovers throughout the life of the ever-evolving Battle Royale game. The game also features a massive amount of superheroes, allowing players to fight as their favorite crime fighter. DC has had many heroes and villains in the game, from the famous Batman and Superman to other fan favorites like Joker and Poison Ivy.

Some of these skins could be obtained through past battle passes, the item shop, bundles or more only through codes received from Fortnite X DC comics. Some of these DC skins are more favorable than others, either because of special features that make the skin unique, or simply because of how the DC skin looks.

With the release of Black Adam in theaters, Fortnite unveiled its Black Adam skin, featuring Dwayne “The Rock” Johnson as the character. The entire skin looks like it was taken straight out of the movie. The skin has a reactivity effect, following the elimination of players.

When the player gets kills, the yellow parts of Black Adam’s costume begin to glow, as well as Black Adam’s back. Black Adam also has his own emote, where he sits on a ruined Kahndaq-derived throne.

Superman was the exclusive Chapter 2 Season 7 skin, in which players had to complete challenges in order to obtain Clark Kent. This skin initially featured the mighty Superman in his human disguise as Kent. Once players complete the challenges, they’ll receive a built-in emote for Kent in which he quickly transforms into the beloved Superman.

Superman had one more style that players could unlock, and that was his Shadow costume. It shows Superman in his all-black costume, with glowing white eyes.

The Joker was a skin that many DC and Fortnite fans were looking forward to. This skin was eventually revealed to be in Fortnite as part of “The Last Laugh” pack, which also contains Poison Ivy and Midas Rex. Joker is presented as his recognizable self with clown makeup and Joker attire.

It has two different styles; Joker with his jacket and Joker without his jacket. Players can also take off Joker’s hat with either style, depending on their preference. This skin should still be available when it hits the Item Shop again with the bundle.

Beast Boy made his revelation in the Fortnite world shortly after his companion Raven. He wears his classic costume, but also has an alternate style in which he wears casual clothes. he wears a zipped jacket and jeans.

Beast Boy, with his canonical powers, is able to use his built-in emote to transform into a gorilla! This allows players to seemingly play as Beast Boy and use his powers to a very limited extent, but it’s still enjoyed by most fans.

This skin was an exclusive cosmetic only available in the Chapter 2 Season 6 battle pass at level 77. This means that players who did not obtain it at the time unfortunately cannot obtain it anymore. This skin shows Tritan’s daughter in her Rebirth costume, and she has two other styles as well.

One of those styles is her classic costume that any DC fan can easily recognize, and the other features her in casual clothes as Rachel Roth. She also has a matching glider that uses her magic to form a crow while gliding towards the Fortnite island.

The Flash is finally rushing to Fortnite to regroup with his DC comrades. This DC skin apparently shows Barry’s outfit from the CW show, The Flash. This skin was initially available through The Flash Cup, where players could compete to try and get the skin for free.

Otherwise, this skin was released in the Item Shop shortly after competitive mode. The Flash has a few cosmetics to match, one notably being his emote; he visibly walks away, grabbing food and drink for himself.

No fan would have expected Fortnite to unveil such a terrifying character in their family game, but they shocked their audience with the Batman Who Laughs reveal.

This menacing character was available through the Item Shop along with his other cosmetics, or by getting a code through one of Fortnite’s comic book collaborations with DC. The Batman Who Laughs has his own glider, which appears to use evil magic to guide him, and his own harvesting tool.

She is featured in her classic outfit, but players can change up to don her New 52 style; it’s also Amazon’s mighty armored suit. His glider uses his golden eagle wings as seen in his golden eagle costume.

This Batman skin was available with the Caped Crusader pack. This outfit showcases Christian Bale’s Batman costume from The Dark Knight movie. This allows players to play as the Batman many have seen in live-action movies, making it highly rated by any Dark Knight fan.

Along with getting this outfit comes another Batman skin, a glider, and a harvesting tool, both specially designed to match Batman. This outfit is more unique than its counterpart simply because it was taken from The Dark Knight.

Harley Quinn has more than one obtainable outfit in Fortnite, but the Rebirth Harley Quinn is definitely more unique. This skin features Harley (obviously) in her Rebirth outfit.

This red and black costume also has an additional style, in which her hair changes from cotton candy pink and blue to red and black to match her outfit. This skin, obtained only by purchasing the Batman/Fortnite: Zero Point Issue 1 comic, also has one of the best reactive back bling in the game; it displays a timer before the next storm area.

NEXT: Fortnite: The Best Marvel Skins