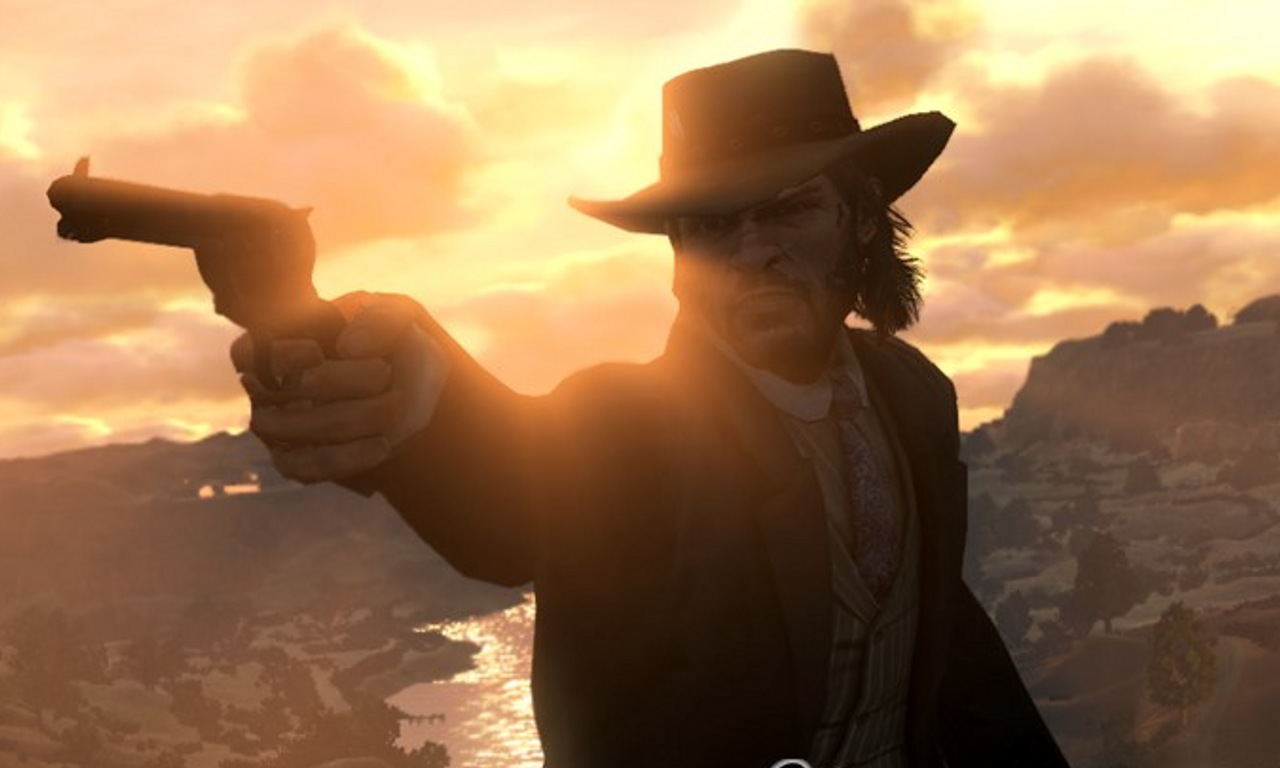 Our website turns 25 this year and we revisit the 25 greatest games of our lifetime; we started the series with 1999’s ‘Metal Gear Solid’ and today we’re trading espionage for cowboys – it’s 2010’s ‘Red Dead Redemption’

If the first 3 years of the PlayStation 3 and Xbox 360 generation could be defined by one word, it’s “cover”.

Ever since “Gears Of War” changed the third-person shooter to a cover-based system, the developers were keen for players to spend long periods of play crouched next to a piece of concrete.

2008’s “Grand Theft Auto 4” gave players the chance to explore a digital version of New York City by car, boat, or plane, but Rockstar Games’ follow-up offered true freedom like never before in a video game.

If the “Grand Theft Auto 4″ map was smaller but more detailed, “Red Dead Redemption” was the opposite; sprawling and sparse.

If at the start of the 7th generation of consoles, players hid behind a wall, the revolution led by “Red Dead Redemption” allowed players to stretch their legs.

Loneliness in the plains

The desert and its surroundings have always created striking cinema, from the John Ford era all the way to the 2021 Best Picture Oscar “Nomadland”, but the serenity of the desert has rarely been captured in video game form.

Between duels, train robberies, and running away from federal agents, the vast majority of “Red Dead Redemption” is spent riding around.

While in “Grand Theft Auto 4” you could turn on a classic rock radio station or an indie station while traveling to missions, no such feature exists in “Red Dead Redemption.”

It was a necessity born out of the setting of the game set in the early 20th century, but the trade-off for it allowed players to get to grips with the game’s unparalleled sound design and heavy musical score.

Hearing the Morricone-style sting go off as you stroll through the nearest town never gets old, and the game serves as your own personal western movie.

The feds have taken Martson’s family away and won’t be able to see them again unless they help find members of his old gang.

As far as Western storylines go, it’s pretty much in line with the book, the “one last work” trope we see in countless forms of media, but how “Red Dead Redemption” puts a familiar twist on the story in making John Martson a character you would love to meet and end up caring deeply about.

He is surly, prone to wayward outbursts, is true only to himself, and treats every job as a means to an end, but by the end of the game, his death at the hands of the federal agents to whom he reluctantly trusted is a punch. like no other in the game.

Rob Wiethoff’s vocal performance as Martson does a lot to endear the player to John Martson, existing somewhere between John Wayne and Billy Ray Cyrus.

In the games’ lighter moments, its serious, no-frills exterior pairs surprisingly well with even the most eccentric characters.

The aptly named Irish character “Irish” serves as a comedy flick for the austere cowboys around him.

“Red Dead Redemption” beautifully captures a moment in world history and the people of fascinating characters who all have their own hopes, dreams and ambitions.

South of the border

When people talk about “Red Dead Redemption,” a moment comes to mind: the moment you first enter Mexico.

After fending off waves of enemies on a rickety barge, the player is then free to explore the deserts of northern Mexico.

Rockstar’s trademark of playing well-timed licensed music is at its best here, as José González’s “Far Away” kicks in as the Mexican wilderness reveals itself to the player.

José González helped sell millions of Sony TVs in 2005 when his song “Heartbeats” was used to advertise Sony Bravia TV, and Rockstar struck it twice by including his beautiful music at a prime time. .

When the game makes its foray into Mexico, the story takes on a political twist, with the player playing a part in the real Mexican revolution.

Seeing Martson embroiled in political intrigue in a nation he’s unfamiliar with adds another layer of depth and complexity to the game and portrays the revolution with nuance.

Martson’s role in the revolution is similar to that of Han Solo in “Star Wars” in that he doesn’t really care about the cause, but will do anything to benefit his own ends, and ends up caring about the revolution and what it represents.

Rockstar’s approach to politics has always taken the “South Park” “both sides are bad” style, but in “Red Dead Redemption” they portray a real historical event with tact and grace.

One of the great advantages of video games is that duration is not an issue.

A game like “Red Dead Redemption” deals with themes like revenge, atonement, political upheaval, loss, greed, racism, and American exceptionalism, and you’d be hard pressed to find a movie that could incorporate all of these themes in a 2- hour runtime and give them all room to breathe.

Last year my colleague Brian wrote about the Irish cultural fascination with Western film, and for Irish people in particular, the Wild West has always been a romantic idea.

Perhaps it’s the story of our own country traveling the world for work and the idea of ​​going to the United States after the famine and trying to make our own luck that draws us to the Wild West media.

On the big screen, the likes of Kevin Costner, Kurt Russell, John Wayne, Gary Cooper, Lee Van Cleef and Clint Eastwood paint the Wild West as the era of the man with a jaw that could cut glass, but what is is Red Dead Redemption? ‘ does best is to subvert the tropes.

At the very end of the game, after killing all those gang members and jumping through all those hoops for the US government, you will die at their hands anyway.

To quote Alan Rickman in “Die Hard,” “This time John Wayne isn’t going off into the sunset with Grace Kelly.”

(It was Gary Cooper, asshole!)

John Martson’s tragic demise ranks among the greatest heartbreaks of all time.

At this point in the game, John Martson has reunited with his family, he’s carried out his revenge against his old gang, and seems ready to settle down.

The game makes you think he has a chance to see the feds – after all, John has survived bigger battles before.

Dead Eye activates, you get a few gunshots giving players the brief belief that they can survive, when the volley of gunfire riddles John’s body.

As far as endings go, it’s up there with the ending of “Life On Mars” or the ending of “There Will Be Blood” – a cathartic last-minute rush that leaves you wanting more and is truly devastating. .

Rockstar San Diego followed up the base game with the “Undead Nightmare” DLC later in 2010, adding some surprisingly brilliant zombie DLC to the mix.

It should be noted that the game was developed by Rockstar San Diego, a smaller studio within the larger Rockstar network.

2018’s “Red Dead Redemption 2” is considered one of the defining games of the 8th generation of consoles, but its legacy has been complicated.

2022’s Rockstar Games is a very different developer than the one that released the original ‘Red Dead Redemption’.

Rockstar San Diego worked on “Red Dead Redemption 2,” but it was as part of Rockstar’s larger developer network, and allegations of morally questionable labor practices on games have become industry cautionary tales.

The original “Red Dead Redemption” was an exciting project for Rockstar San Diego and was developed without the expectation that the game would become a landmark title in video game history or a blockbuster hit.

“Red Dead Redemption 2” struggles and works to do what the original did perfectly.

The sequel has the kitchen sink thrown over it, with every didactic element within an inch of its life, the pacing often stopped for players to soak up the digital landscape that took a lot of blood, sweat and tears to make, and in general, the game seems to bend over backwards to please the player.

A lot was done before the release of the horses testicles shrinking due to the in-game cold, but with all that effort put into something very few gamers would notice, they forgot to make the gameplay fun.

The original “Red Dead Redemption” didn’t need any of those bells and whistles.

All it took was a surly cowboy, an acoustic guitar, and a horse.