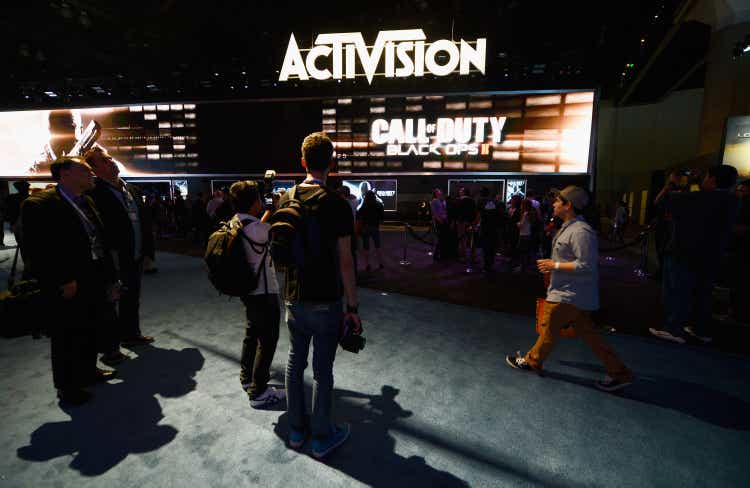 Activision and Microsoft had incentives to move forward with the case.

On Activision’s end, it was plagued by a class action on discrimination and sexual harassment. The lawsuit alleges how a “frat boy” work environment emerged in Activision that encouraged more than 700 acts of sexual harassment of female employees by male employees. Worst of all, it has been alleged that CEO Robert Kotick had been aware of the situation since 2018. It is likely that if the deal were to go through, Kotick would leave the company, along with other senior executives. Overall, this depressed the stock price significantly, increasing talk of a potential buyout.

On Microsoft’s side, there are many significant benefits to integrating Activision’s business. First, it will be immediately accretive to Microsoft’s earnings. The addition of Activision will bring Call of Duty, World of Warcraft, Overwatch, Diablo and Candy Crush to Microsoft’s games portfolio and propel Microsoft to third place among game developers worldwide. Microsoft’s gaming business generated $15 billion in revenue in fiscal 2021, while Activision generated $9 billion. Adding ATVI would mean Microsoft will control 14% of the industry. During the acquisition conference call, Microsoft Chief Financial Officer Amy Hood explained how Microsoft would proceed with the monetization.

Key metrics of our success include accelerated revenue growth from Activision Blizzard’s games portfolio as we expand content to more devices, resulting in increased engagement and monetization on the platform. Xbox; as well as further growth in Game Pass subscribers as we attract new players wherever they play and continue to create one of the most compelling and diverse lineups of AAA content available.

Second, Activision’s gaming portfolio will dramatically increase reception of xCloud, Microsoft’s rising cloud gaming platform, which enables cross-platform, console-free gaming as long as users have a screen and a Internet connection. Neither consoles nor PCs will be required for subscribers to access gaming content. This evolution of games will likely result in recurring and stable subscription fees. CEO Satya Nadella had this to say about how Activision’s gaming portfolio will help promote xCloud.

Through the cloud, we’re extending the Xbox ecosystem and community to millions of new people, including in global markets where traditional PC and console gaming has long been a challenge. And when we look to the future and consider new possibilities, like offering Overwatch or Diablo, via streaming to anyone with a phone as part of Game Pass, you begin to understand how exciting this acquisition will be.

As of this writing, there is huge risk that the deal will go through, primarily due to the Lina Khan-led FTC investigation into the deal after it was announced. More recently, the The FTC probe will consider the merged company’s access to consumer data and whether or not this resulted in less competition for labor via non-competitions. The priority is whether or not Microsoft will end up disenfranchising the same Activision workers who have spoken out about the company’s toxic work environment.

To give my two cents, I don’t think the FTC will end up blocking the deal, if Microsoft publicly announces a set of actions it will take to ensure that it can systematically change and improve the work at Activision. Even if the optics of a big tech company rushing to buy a company that’s been embroiled in low-cost scandals isn’t favorable, there are plenty of things Microsoft can easily offer to help improve the current situation at Activision. .

Specifically why the deal is unlikely to stall, Microsoft remains essentially a business and even with revenue from mainstream businesses such as gaming growing rapidly, it still represents a minority of Microsoft’s revenue. By extension, this weakens the importance of the consumer data access argument, as gaming and entertainment data is unlikely to be used for Microsoft’s core business.

Implications for Big Tech Acquisitions in the Future

The fact that Microsoft, a company that has been relatively untouched by antitrust regulation globally for the past 10 years, suddenly came under intense scrutiny from Lina Khan’s FTC, really shows how the FTC changed under the Biden administration. Under Lina Khan, he has already blocked two huge deals, namely the NVIDIA (NVDA) acquisition of Arm and Lockheed Martin’s (LMT) acquisition of Rocketdyne (AJRD).

When you dissect Lina Khan’s interviews on sites like CNBC, it’s clear the FTC will be reviewing the deals going forward. Rather than focusing solely on consumer benefits as was the case in the past, the FTC is now focusing on “antitrust for antitrust’s sake”. She points out in her interview with CNBC how monopolies must be prevented by going beyond the final agreement that results in the monopoly, giving way to further scrutiny, especially in any future acquisition by Big Tech.

By extension, Lina Khan pursues two key areas: labor market competition and monopsony power, and data privacy, all as it relates to acquisitions. What this means for tech companies and their acquisitions comes down to two practical ideas they can use: reducing equity-based competition (SBC), as this is likely something the FTC will look into regarding labor market competition, and data reduction. follow-up programs at large tech companies.

So what does Microsoft get here? Well, like the press release details, it’s about getting a bigger slice of the $200+ billion gaming industry. 3 billion people play games today, and that number could grow another 50% by 2030. In the chart below, you can see some of Activision’s key financial figures over the past five years , with a comparison also of how the first nine months of 2021 fared compared to their counterpart in the previous year.

For the full year 2021, Activision is expected to record revenue of approximately $8.74 billion. This number is expected to grow to over $10.3 billion by 2023, with further growth potential in the future. It is also a very profitable business, with Activision posting net profit margins of 32.15% for the first three quarters of 2021, compared to 29.75% in the first nine months of 2020. This level of profitability is a little lower to that of Microsoft currently, but I’m sure some expenses can be cut here, and there are plenty of companies that would like to have net margins over 30%.

From now on, investors will point out that this agreement will not have a major impact on Microsoft’s turnover. This is true up to a point, as the image below shows current estimates calling for around $196.5 billion in revenue in the current fiscal year ending in June. However, the alternative in my opinion was to buy back shares, which would bring no additional income. Additionally, Microsoft is paying approximately 6.6 times Activision’s projected December 2023 sales for the deal, which would be cheaper than buying back Microsoft stock at the implied valuations below. All in all, this is likely a win for Microsoft in the long run.