Minecraft Frogs: Everything You Need to Know (March 2022) 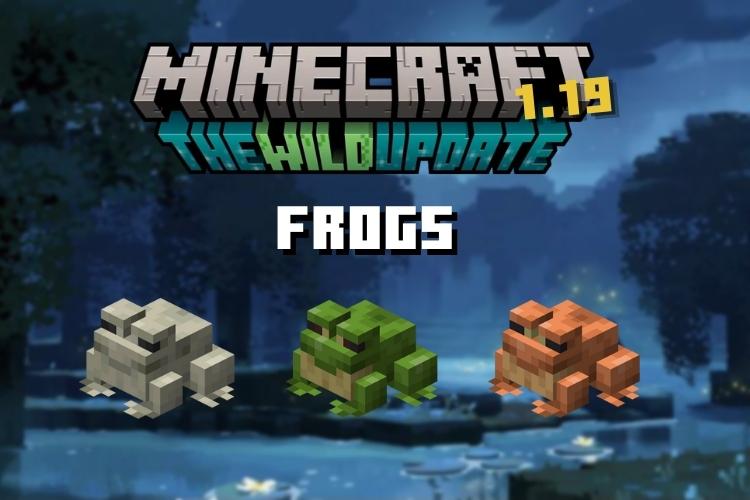 Minecraft 1.19 update is almost here, and it brings several new mobs and biomes to this game. There are new structures, enchantments, and many other new additions to the game. But one thing that stands out the most amazingly is the mob of frogs in this Minecraft update. Starting out as a simple mob in front of Allay and Warden in Minecraft, frogs have steadily grown in popularity among the community. That’s because they have variations, new food mechanics, a new breeding system, and some of the coolest animations in the game. But if you haven’t met the frogs yet, you’ve come to the right place. In this guide, we’ll cover everything you need to know about finding, catching, and breeding all variants of frogs in Minecraft. The crowd of frogs brings a lot to the table, and we’re all in. So, without further ado, let’s dive into the world of Minecraft frogs.

We’ve split the guide into separate sections, covering different aspects of frogs and tadpoles in Minecraft. You can use the table below to explore each of them at your convenience.

Which Minecraft update adds frogs to the game?

Mojang will officially add frogs to the game with the Minecraft 1.19 The Wild update. The developers are currently testing this new mob in Java snapshots and Minecraft Preview (more on that below), alongside Warden and Allay. And you can also test them right now. Minecraft 1.19 update with frogs is expected to start rolling out to users in April or May. There’s no concrete timeline at the moment, so stay tuned for more information.

Frogs were first introduced in Minecraft Beta 1.18.10.24 for Xbox, Windows, and Android. They are officially coming to all Minecraft Java and Bedrock platforms with the official release of Minecraft 1.19 Wild Update.

What do frogs do in Minecraft?

As the name suggests, Minecraft frogs are a recreation of real world frogs in the game. But unlike real frogs, Minecraft only has three variants of frogs, and each one of them is cute. All these frogs in play can jump up to a height of 3 blocks, who is as tall as our protagonist. Additionally, unlike any non-flying mob, they take little to no fall damage with and even without jumps.

Behaviourally, they croak and puff their necks or vocal sacs from time to time. According to Mojang, frogs ribbit, hop and like to sit on water lilies. If they don’t jump, frogs use their four legs alternately to walk around. As for their food, Minecraft frogs only eat small slimes and small magma cubes.

In previous betas of Minecraft 1.19, frogs could eat fireflies and, jokingly, even goats, but this is no longer the case. Now the frogs can only attack and eat small slimes and magma cubes with their long tongues. Getting eaten by a frog causes the slimy little monsters to disappear immediately, but not without a drop.

If a frog eats a small slime, it drops balls of slime which can then be fed to frogs. However, more interestingly, when eating a magma cube, the frogs drop a frog. It’s a bright block of the same color as the frog that dropped it. The player can then pick up this block to use for decorative purposes. There is no in-game recipe yet that involves frog fires.

Where to find frogs in Minecraft?

Frogs usually nest near water sources in from Minecraft swamp and mangrove biomes in groups of no more than five. Beyond swamps, frogs can also grow in a variety of other biomes, but Mojang has yet to release a confirmed list of these biomes. Besides natural spawning, you can also get frogs by farming them or raising them using tadpoles.

Breed frogs in Minecraft to get tadpoles

Similar to how we raise villagers in Minecraft, you can also raise frogs by feeding them their favorite food. So, all you have to do is bring two frogs close together and feed them slime balls to get them into their breeding mode. Hearts will emerge from their heads, indicating the start of the breeding phase.

Then one of the frogs will go near a water source to lay eggs. Minecraft does not follow the gender binary concept of male and female. Thus, the frog that lays eggs is chosen at random. Corn each frog lays eggs only in bodies of water. There is no minimum or maximum size for water bodies, but an area of ​​3 x 3 blocks should suffice.

The technical name for the eggs that the frog lays is “frog spawn”. These are non-solid blocks that float on top of water source blocks. If a player is in survival mode, there is no way to get a frog spawn. They break and disappear immediately if a tool is used on them, even with the Silk Touch enchantment. However, touching or jumping on the eggs in the game causes no harm.

Once laid, these eggs or frogs lay hatch into tadpoles after 5-10 minutes. A group of spawn frogs can release up to 6 tadpoles at a time. Their animations and survival pattern are similar to fish in Minecraft. With that said, let’s learn how tadpoles work in Minecraft to spawn frogs in the game.

As you already know tadpoles are the baby version of frogs in real life as well as Minecraft. They have very limited health and most mobs can kill tadpoles with one hit. Fortunately, their only enemy in bodies of water is the axolotl. And they cannot survive out of water for more than a few seconds, even at full health.

Although, unlike eggs, a player can transport and move tadpoles to another location using a bucket of water. As for their growth, tadpoles usually take less time than the hatching process to turn into frogs. However, you can Feed them slime balls to make them grow even faster. As for the type of frog they will become, it depends on the biome they grow up in.

Minecraft is currently testing three types of frogs, depending on the biome it lives in. And the three variants of frogs include (via Minecraft Wiki):

Depending on the biome they live in, tadpoles become the temperature frog color of that Minecraft biome. The variant of their parents and the hatching location of the frog’s spawn have no relation to the final color of a new frog.

How to Find Frog Variants in Minecraft

As of March 2022, frogs are exclusive to Minecraft Bedrock betas and the latest Minecraft preview. So if you don’t want to wait for the official release, meet the frogs by installing the Minecraft 1.19 beta using our linked guide. However, make sure to create backups of your existing worlds before upgrading to beta.

Can I transport frogs in Minecraft?

Unlike tadpoles, you cannot place frogs in buckets of water. But you can make them follow you by holding slime balls.

Can you tame frogs in Minecraft?

Frogs in Minecraft 1.19 Wild update cannot be tamed or kept as pets. But you can cage them by creating walls at least four blocks high.

What can you do with frogs in Minecraft?

Other than creating frog lights or having them around for aesthetics, there is no other functional purpose for frogs in Minecraft.

In previous betas of the Minecraft 1.19 Wild update, the developers allowed frogs to eat goats as an inside joke. But in the final version, frogs can’t eat goats or fireflies.

What do tadpoles eat in Minecraft?

Frogs and tadpoles eat slime balls. This accelerates the growth of tadpoles and forces the frogs to reproduce.

Whether you want to start a bright frog farm or need some new friendly mobs in the game, Minecraft frogs have you covered. All you have to do is download the latest beta version of Minecraft and immediately start filling your world with frogs. However, they are not the only Wild update monster that is already here. The long-awaited mob boss Warden is now live in Minecraft, as is the cute and friendly Allay mob who collect items for you. Learn all about Allay in Minecraft and how to try it out right now via the linked guide.

And if you’re on the Java edition, get the latest snapshot to encounter and hopefully try to survive the Guardian as well. But make sure you have all the best Minecraft enchantments active before battling the new boss. For extra help, you can also take some of the best Minecraft potions with you. The night vision potion is especially important when fighting in deep, dark caves. That said, it’s time to get back to the Frog Swamps which is just one of the biomes getting upgrades in this update. So what new change are you most looking forward to seeing in the Savage Update? Tell us in the comments below!