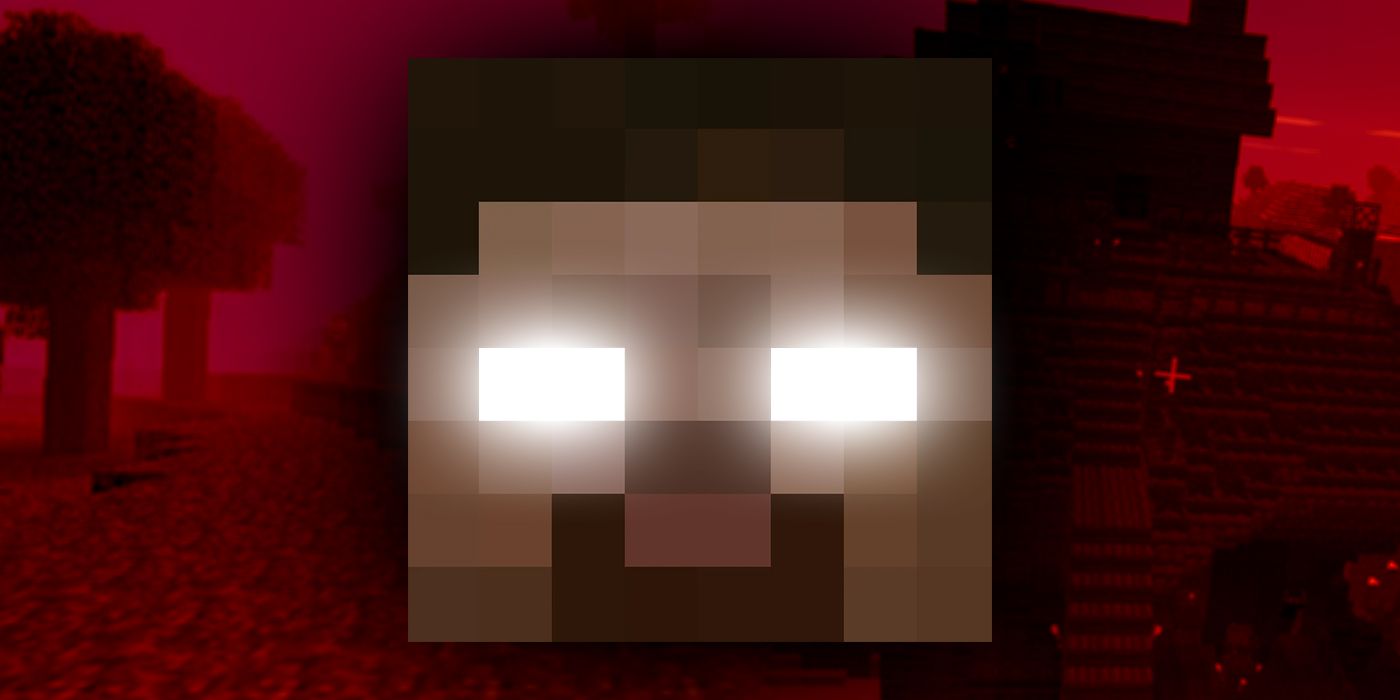 Minecraft is a fairly innocent game that invites players to express their creativity in a virtually endless sandbox. Players mine, craft, build, and explore a procedurally generated world of blocks, with the only real goals being pretty much those set by the player. In such a limitless game world where exploration is key, players are sure to stumble upon some truly bizarre occurrences. One of those events was a truly terrifying discovery made long before the horrors of the Nether.

A player once claimed to have seen something in the fog caused by their low render distance. They had just started a new world and thought it was a cow they could get leather from. However, when they caught up with the unknown entity, they discovered that it was a default player model with totally white eyes. The entity reportedly ran into the fog and disappeared, although the player mentions strange structures appearing in their game world after the event.

RELATED: Minecraft and Pokémon Go Are the Most Difficult Mobile Games Ever

This story is one of the best known and most fictionalized gaming creepypastas. It originally appeared on 4chan’s /v/ board and was accompanied by an eerie image that depicted the blank-eyed player model standing in the fog. This entity would become known as Herobrine after the player claimed to have received messages from a Minecraft forums user with the same username.

The original creepypasta sure caught people’s attention, but it would be early Minecraft streamer, Copeland, who would catapult the Herobrine mythos to wide popularity in August 2010. He had seen the creepypasta and wanted to set up a “meet-and-meet” with Herobrine on his stream. He first edited Herobrine into a few screenshots which he sent to his chat. From there, Copeland replaced a painting from the game with an image of Herobrine.

The actual stream Copeland did has since been archived and confirmed as lost, but the written accounts and clips of the staged encounter with Herobrine do exist. This encounter involves Copeland entering his in-game house, only to come across Herobrine standing in one of the rooms. Copeland screams and the stream quickly ends. Considering he pulled this off in 2010, it was an incredibly well-executed scare that helped boost Herobrine’s popularity.

After Copeland’s original stream, Herobrine has become an iconic character in the Minecraft community. There have been countless fanworks that have featured the character, including some truly terrifying mods. Devoted fans were even able to determine the exact world-gen seed that was used for the original Herobrine creepypasta image, and have since nicknamed it “Herobrine Hill”. There is even a running joke in the official Minecraft patch notes, in which Herobrine is “removed” in every update.

The 2010 Copeland stream may have been incredibly compelling for its time, but it didn’t take long to the myth to be debunked. Not only MinecraftThe creator of publicly denies the existence of Herobrine, but fans have also been digging through the game’s files at this point. The modding community opened up the game’s code and made the game’s base textures publicly available, illustrating that Herobrine was not present. Still, that doesn’t change the impact of Copeland’s stream, and although the original footage was lost, the backup world was surprisingly discovered twelve years later by YouTubers Enderboss25 and SapLow.

Being debunked hasn’t hindered Herobrine’s popularity, as there are still players to this day asking for him to be officially included in Minecraft. While official Mojang employees have commented on Herobrine, there have been conflicting responses as to whether it will ever be added to the game. The last official position heard was from Mojang CTO Dinnerbone, who said in 2012 that there were no plans to add Herobrine, and that would probably never change.

Herobrine may never be officially added, but that doesn’t mean he hasn’t made a few appearances. He has appeared on official Minecon art, promotional materials for the lego minecraft sets, Mojang’s social media accounts, and even as a genuine Minecraft account belonging to someone close to the Mojang team. The first skin pack for the pre-Bedrock version of Minecraft on consoles even included Herobrine as a skin, marking the only time he officially “appeared” in Minecraft.

Herobrine’s unlikely inclusion in the game isn’t really the point. He’s been a fan-made entity since the very beginning, and he continues to thrive on his fans to this day. Mojang’s continued references to him in the game’s patch notes and official art have also helped new players experience one of the Minecraftoldest urban legends. Even though Mojang strictly keeps it a myth, the community will ensure that Herobrine and the original creepypasta remain a weird and beloved part of Minecraftthe inheritance.

A writer for CBR since September 2020, Jacob Creswell is a longtime writer and gamer. Has written for local and global publications. Lover of Animal Crossing, Undertale, Team Fortress 2, and a bit of pro wrestling on the side. He can often be found doing far more research than necessary for his video game theories. Can also be found on his Twitter, @Creaology98