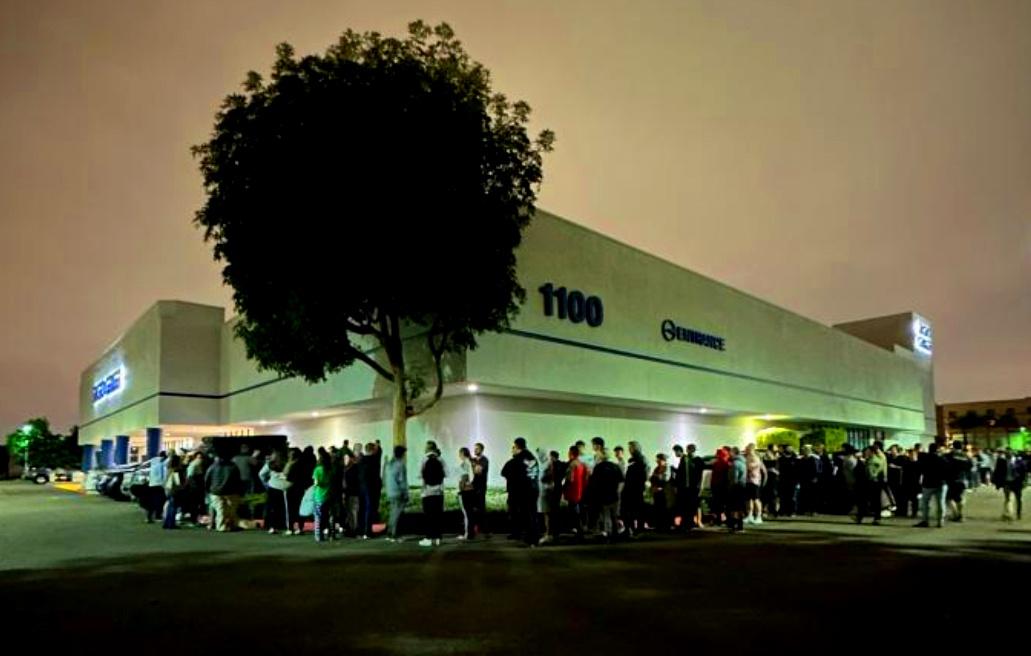 Current macroeconomic factors may work against the growth of any market that might be considered discretionary spending, but regardless, the demand for high-end PC gaming gear seems strong. Just look at NVIDIA’s recent launch of the GeForce RTX 4090, a $1600 graphics card for gaming enthusiasts, creators, and data scientists. Granted, it’s impossible to analyze who exactly these gaming GPUs are selling to, but demand seems to have been very strong so far with this launch.

The photo above really says it all. Although this very high-end NVIDIA graphics card retails for $1,599, PC enthusiasts and voracious gamers lined up at retailers around the world for the first few days of availability, hoping to get in on the action. There is an important distinction to be made here as well. Given that NVIDIA was able to ship a significant amount of cards for a global launch effort on day one, we can assume that there was at least a fair amount shipped from the start. The only question that remains is how NVIDIA’s restocking efforts can respond, as many online and brick-and-mortar outlets are currently showing out-of-stock status for GeForce RTX 4090 Cards. However, there are still a few third-party card partner cards to be found, albeit at prices significantly higher than NVIDIA’s GeForce RTX 4090 MSRP.

A source close to the company told me that NVIDIA “There have definitely been people queuing before for GPUs, but for much cheaper (pre-pandemic) cards. And with the current economy, that’s pretty remarkable. We should temper this, again, with a little pinch of salt of course, as current month availability metrics will be critical to watch. Persistent sold out flags could mean that NVIDIA is selling all the RTX 4090 GPUs it can build, or that it can’t keep up with demand. That said, if we go back to the company’s Q2 2023 earnings call in August, NVIDIA CEO Jensen Huang said that “our sales are far from the peaks of the beginning of the year, but they are still very solid. In fact, sales are up 70% since pre-COVID, pre-pandemic times. And so it’s very clear that gaming, the fundamentals of gaming are solid, and this medium is doing really well. Not to mention that gaming rigs are used or gaming PCs are used for influencers, people share content, create content, VBloggers, VTubers, etc. There are all kinds of new ways to engage and spend time with video games.

Jensen’s observations pretty much sum things up for the current market dynamics. Not only are gaming PCs with powerful graphics cards still in high demand, but the entire desktop PC platform has seen something of a transformation in recent years and been pushed even further into the mainstream. during the pandemic surge in demand for working from home. Modern gaming PCs are no longer just great entertainment platforms for gaming, but they are also powerful media creation and sharing tools that more and more people from all walks of life are using and experimenting with. And for me, that broader market appeal should lead to more consistent demand.

It will be interesting to see how NVIDIA’s numbers perform during the company’s upcoming earnings call, which is expected to be held on 11/16/2022, but charismatic CEO Huang said this during a recent session of investor day Q&A to its GPU technology. Conference (GTC) a few weeks ago. “Generally, and Ada will be no different, we go top-down. This is where enthusiasts would like to see new products and customers who refresh more frequently every two years or so would like to see their new products. This is also the segment where we need to scale up for Omniverse and Omniverse workstations and servers… It was a good place for us to scale up first. And so we’re going to be accelerating Ada nicely starting a bit this quarter, but a lot of it next quarter and very, very robustly exiting the year and into next year. So that’s our current implementation plan. But we are in a very good position right now.

I’m not much of a bettor, but I think the combination of strong incentives to move remaining inventory from legacy product channels, coupled with strong demand for its latest RTX 40 powered by Ada Lovelace GPUs in the series, could hold better near-term prospects, also with a strong holiday shopping season through the end of the year.